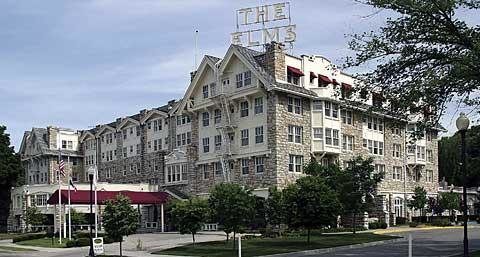 This hotel dates back to 1912 and is the spot where Harry S. Truman spent election night in 1948. It was also once a training camp for boxer Jack Dempsey, and a summer camp for the 1948 New York Giants. The hotel is also known for its ghosts, who provide a pervasive eerie feelings for some. Stories say the hotel's lap pool is haunted by a male ghost from the speakeasy days, during which the pool was part of the basement. The man was said to have been killed here by the mob. Other stories say the ghost they've spotted at the pool is a woman, who is seems to be upset and in search of her child. Her ghost is known to pull hair and throw things if her temper is riled. A ghostly woman wearing a maid's outfit, said to be in her twenties, haunts the hotel's third floor and is said to supervise the living housekeepers.