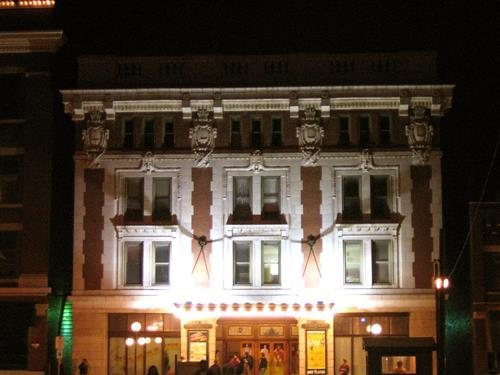 Built in 1909, this theater is also known as the Springfield Little Theater. It was renovated in 1970 and is rumored to be haunted by a number of ghosts. One is believed to be a janitor who died in a fire in 1920. His apparition has been spotted in the balcony watching rehearsals. Another ghost is an African-American man who was stabbed to death in the 1920's in the second balcony. He appears as a green hazy orb that is about 5 feet tall. A ghostly baby also haunts the theater, falling from the balcony, a recurring scene of a past accident. The baby's cries can also be heard at times. From the street outside, witnesses have seen a tall blond man's apparition wearing Elizabethan clothing looking out one of the fourth floor windows. Other entities have also been spotted here and some have even followed people through the building or tapped them on the shoulder.