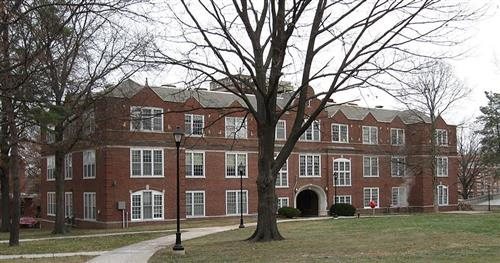 This college is rumored to have many ghosts, according to local stories. The Pillsbury/Roblee Dorm Hall is said to be haunted by three ghostly women called the Blue Ladies who sing to students and tuck them in at night. Phantom baby cries have been heard at Searcy Hall, who is believed to be a the spirit of a newborn who was left in a locker by a student. At Senior Hall, a ghost named Sarah wanders around. She hanged herself here after her Civil War soldier lover was killed for deserting. The fifth floor of Tower Hall is said to be haunted by several ghosts.